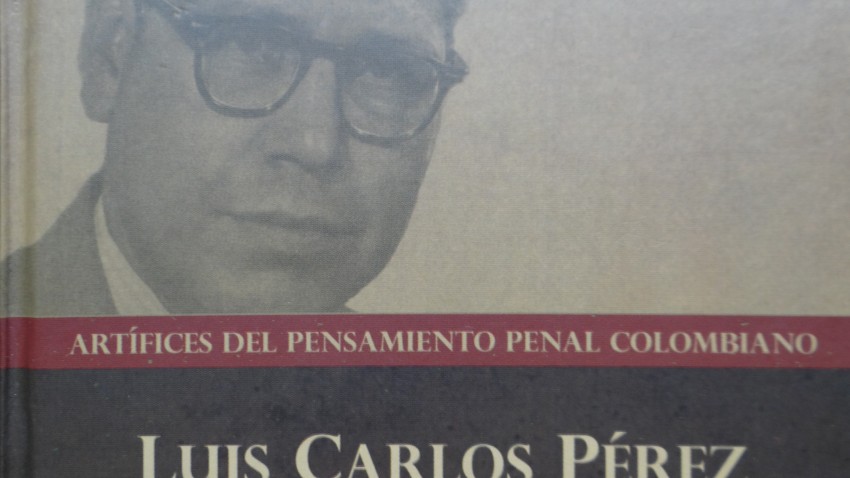 BIOGRAPHY LUIS CARLOS PÉREZ
“For there to be justice, the collective guilt must be studied, that of the leaders, that of those who throw the people where they do not want to go. That of those who work social misfortunes and then charge them through violent imposition in factories, streets, fields and universities. ”
LUÍS CARLOS PÉREZ
(1914 - 1998)
By: Guillermo Alberto González Mosquera

The most outstanding feature of Luís Carlos Pérez's life was his uninterrupted vocation as a teacher, an honest and respectable teacher who dedicated his existence to the practice of law as a science. Bernardo Restrepo Maya said of him that "in the environment of the criminalists of Spanish America, one of the strongest prestige is that of the Colombian Luis Carlos Perez" and then quoted the brief and forceful phrase of a world-renowned authority such as that of Filippo Grispigni, who had described the Caucasian jurisconsult as "the highest in Latin American criminology."

Pérez was born in the small town of La Sierra southwest of Popayán, nestled on the foothills of the Cordillera Central. Even as a teenager and without having turned fifteen, he was already a school teacher at a humble campus in the northern town of Puerto Tejada, where he came looking for a place to make a living. His brother Mario, who also distinguished himself in the practice of law, lent him the first long pants so that he could teach without being ashamed before disciples who could be the same age.

In 1941 he graduated as a lawyer at the University of Cauca and immediately started one of the brightest careers of which there is news in Colombia, in the field of law. He was a tireless worker. "The holidays give me twelve more hours of personal work every day," he said when he served as a magistrate of the Supreme Court of Justice. Only in this way his monumental work on Criminal Law is explained, which begins with the publication in 1946 of the "New Basis for Criminal Law", continues with "Criminology", published in 1950 by the National University of Colombia and continues with the four volumes of the "Colombian Criminal Law", the five of the "Criminal Law Treaty", until completing 17 volumes on the subject, which constitute the most significant academic and doctrinal contribution that has been written in the country on this branch of the legal sciences Additionally, his book "The Crime of Propaganda War", which appeared in mid-1951, deserved to be awarded the Peace Gold Medal, in Budapest, with a diploma signed by Monsieur Curi and Ilia Ehremburg. He also published a legal interpretation of April 9, 1948 with the title "Political crimes" and in line with the same theme a work on "The Philosophical Thought of Jorge Eliécer Gaitán" published in the mid-fifties.

His assertions were always blunt and often aroused acute controversy. In a report published in 1972, he reiterated his thesis on guilt as one of the basic problems of modern thinking. "For there to be justice," he said, "we must study the collective guilt, that of the leaders, of those who throw the people where they do not want to go. That of those who work social misfortunes and then charge them through violent imposition in factories, streets, fields and universities. " Thus, the degree of ideological commitment that informed his legal work and the coherence with which he always acted can be understood.

He militated on the Colombian left. He defined himself as "a rebel willing to face his personal contingent to the development of the initiative to unite the dissatisfied." He made his first political interventions in the liberal sectors in whose representation he arrived at the House of Representatives in 1945, when the Liberal Republic was already declining, to which he could have contributed substantial ideas in legal and political matters. Many times he thought of his name as a candidate of the Colombian left to the Presidency of the Republic. But the condition that always demanded on the necessary unification of all sectors and thus being able to form a single front, made that aspiration become unfeasible.

During the Presidency of Alfonso López Michelsen he held the Rectory of the National University, a fact that by his characteristics raised controversial acres that ended with Pérez's resignation and his definitive distancing from the Head of State. He was also a magistrate of the Criminal Chamber of the Supreme Court of Justice, a position that allowed him to leave important doctrinal contributions in the annals of the high corporation. This was one of the few occasions in which he abandoned the gloom of his library and the rigor of his life as a researcher, to submit to a type of life that quarreled with his true vocation