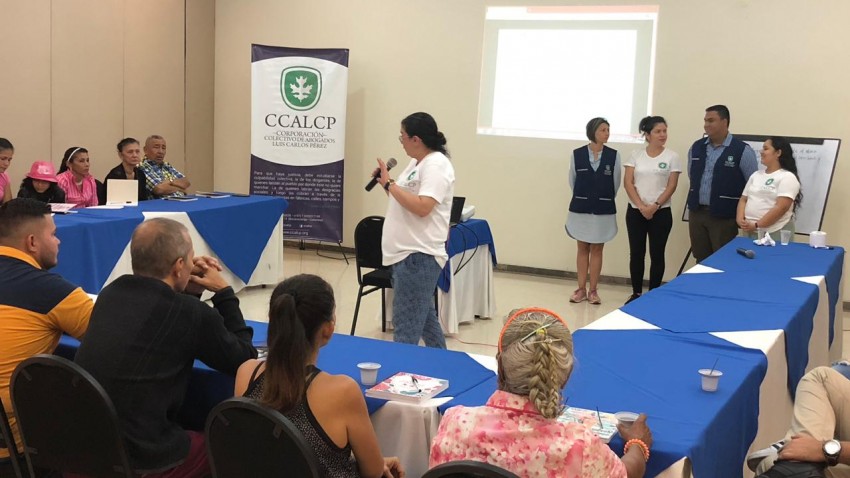 Bringing the right closer to the communities, to the social and popular sectors, in such a way that it is put at the service of the community, social, political and cultural realities in which the population is immersed. In turn, it will contribute to social transformation with justice, equality, social equity, promotion, protection and realization of all human and peoples' rights.

Promote initiatives that promote a peaceful and negotiated exit from the armed conflict, and the real and effective overcoming of the causes that originated it. Defend and demand the victims' rights to truth, justice, comprehensive reparation and guarantees of non-repetition; and the defense and protection of biodiversity against an economic model focused on the exploitation of natural resources and the imposition of projects that go against all forms of life, from the right to land, to territory, to environmental rights, and to the self-determination of the peoples.

WHO WE ARE- HISTORY

The Luis Carlos Pérez-CCALCP Collective Lawyers Corporation began its work in the city of Bucaramanga in September 2001, with the intention of accompanying the social, popular, trade union organizations and the communities of displaced and vulnerable population in the region. For two reasons:

There was no specialized organization in the region that provided legal assistance and advice to the social, popular, trade union and victims of forced displacement from a humanist perspective, and worked fully in the defense and protection of Human Rights.
There was a serious humanitarian crisis in the Colombian regions of the Northeast, Catatumbo and Magdalena Medio.


In 2001, the CCALCP began accompanying victims of displaced population settled in the city of Bucaramanga and its Metropolitan Area.

During 2003, the CCALCP extended its work to the defense of the rights of the victims of Magdalena Medio and in 11 municipalities of the department of Norte de Santander, and in 2005, work was promoted in favor of the Bari People.

From 2006 to 2009, the CCALCP promotes legal, political and educational strategies in favor of the peasant communities of Catatumbo, of the municipality of Toledo in Norte de Santander, and peasant mining communities of Guamoco in the departments of Bolívar and Antioquia.

In 2010, we began rapprochements with the Sikuani People of Vichada, and in coordination with UNHCR, CNR and the Vicariate of San Luis del Tomo we began an organizational and educational strengthening work.

For the year 2010 onwards, the CCALCP joins the causes in favor of the defense of natural resources, especially water in the department of Santander, through the accompaniment and participation in scenarios such as the Committee for the Defense of Water of Santurbán, the environmental oversight committees of the municipalities of Charalá, San Gil, and rural communities in defense of the Ortices Lagoon in the municipality of San Andrés.